Who we are
John Caputo led Gonzaga students to Cagli, Italy for the original program starting in 2003. By the summer of 2015, a Sister City potential is suggested by John and Marco Valeri, the Mayor’s Assistant in Cagli, Italy summer 2015. A Sister City Committee is formed in Cagli and another one is formed in Spokane.  Meetings were held in both cities with a desire to go forward for forming a Sister City relationship (or Gemellagio) between our two cities.  Two Gonzaga students, Shelly Hepler and Stefanie Jentgen build their Master’s thesis on helping form a Sister City Agreement between Spokane and Cagli. Working with the American-Italian Club/Order of the Sons and Daughters of Italy, the move to create a formal Sister City agreement moves forward and with the approval of the Sister City Association of Spokane, and the approval of Mayor Condon, an Agreement between the two cities is formed with a formal signing ceremony in October of 2015, at the Doubletree Hotel. More than 200 people were in attendance including the Board Members of the Sister City Association of Spokane, Mayor David Condon, Mayor Alberto Alessandri (Cagli) and Marco Valeri (Mayor’s Assistant), the President and additional members of the American-Italian Club, and the President of Sister Cities International, Washington D.C. There were many other local and regional supporters in attendance.

One of the first activities of the Spokane-Cagli Sister City Committee was to start a student exchange, to bring 10 high school kids and a chaperone from Cagli to Spokane, in July of 2016. Working with a local Spokane subcommittee of volunteers an itinerary was put together and homestay families were identified to help in this opportunity for citizen to citizen diplomacy. 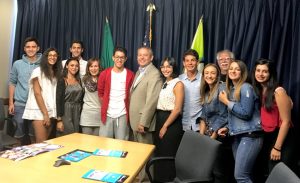 In July 2017, a second group of Cagli students came to Spokane for a 17-day period. Again, there was support from our planning committee, the American-Italian Club of Spokane, and some new homestay families volunteered. 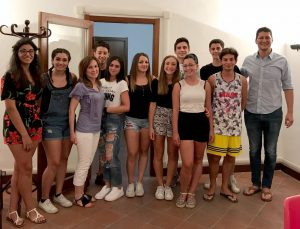 In August 2017, John led a group of 21 Spokane citizens including Mayor Condon on a trip to Italy (Florence, Cagli, Assisi, the region of Le Marche, and Rome.) The visit included a formal Sister City signing as well as a major celebration of Palio dell‘Oca. During this time a plan was created of making the student visitors a real exchange by sending Spokane kids to Cagli for 17 days and finding a funding source to make this possible. 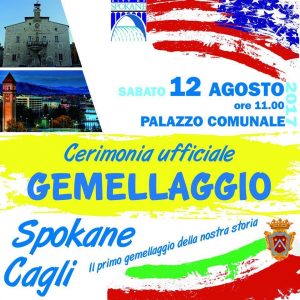 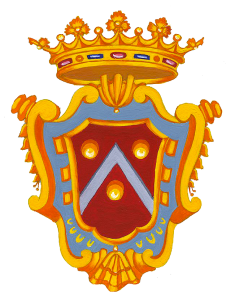 Hidden from tourists among the Apennine Mountains and the Adriatic Seaside, in the Marche region of central Italy, Cagli offers a unique opportunity to explore authentic Italian life. Cagli has a rich history dating back well over 2,000 years. It became part of the Roman Empire in 295 BC and quickly grew in prominence as a vital stop on the ancient Via Flaminia, one of Rome’s earliest and most important roads. After the fall of the Roman Empire, Cagli’s strategic location made it a popular staging ground for battles. In 1287, the city was destroyed by fire in a battle among noble Italian families but was rebuilt two years later under orders from Pope Nicholas IV. Various noble families held Cagli until the Papal States incorporated it in the 17th century, and it became part of unified Italy in 1860.

Though its history is apparent throughout the town, Cagli is a “market city” and boasts a rich modern social scene, with summer concerts and festivals and one of the region’s most beautiful theaters. This city of 12,000 residents is also home to numerous churches, chapels, grocery stores, cafés, restaurants, artisanal shops, soccer fields, a bocce ball club and a hospital, and is the third largest city in the Province. Other outdoor activities include hiking, biking and swimming in the Burano river and the contigious Tre Pozzi (or three pools).

Despite its relative seclusion, Cagli is easily accessible from Rome via bus, with service twice daily. Visitors can also take advantage of locally run buses throughout the day to important nearby cities such as Gubbio, Urbino and the beach towns of Fano and Pesaro on the Adriatic coast. Using Pesaro or Fano as a point of departure, one can transfer onto the Trenitalia train network that stretches the entirety of the Italian peninsula to popular destinations such as Rimini, Bologna, Venezia, Assisi, Cinque Terre, Firenze, Milano, Torino, Verona, Pisa, Napoli and the Amalfi coast. Cagli itself, however, is full of charm and has many stories to tell. It truly is la dolce vita (the sweet life)!

Cagli is the third largest city in the Province of Pesaro and Urbino,  and most of its citizens live outside the medieval main city center. It is a small, beautiful and tranquil town that has many stories to tell. There are also local wineries to enjoy. Cagli is about the people, cuisine, culture, business, and the beautiful countryside. 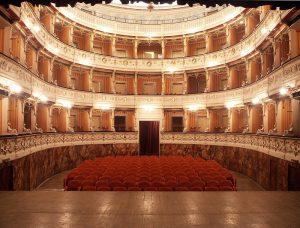 There are many kilometers of hiking trails, bike routes, fishing spots, and festivals to enjoy with one of the most famous opera houses in the province. In the winter months a local ski resort operates at Mt. Catria. In the summer there are an abundance of wonderful local restaurants that host Grillfest, The Cagli Festival, and a new addition- Festival of Carbonara, one of the real treats of the region. The largest local festival is the Palio dell’Oca, in the second weekend of August. The Cagliese are wonderful hosts and love to meet, talk, and share the local wines at the caffes in the piazza. In addition to local hotels, there are rentable apartments, B&B’s and Agriturismo (country houses and villas) to accommodate visitors. Neighboring cities include Gubbio, Urbino, Ancona, Assissi, Perugia, Pesaro, Senigallia, Fano, Rimini and the whole of the Adriatic coast. 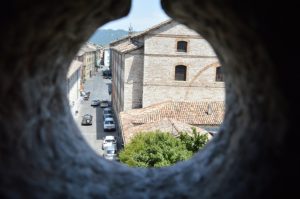 (A view from the torrione (tower) in Cagli) 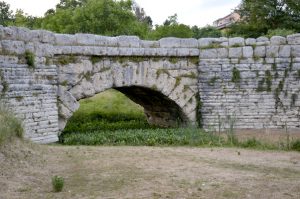 (Roman bridge or ‘ponte’ on the ancient Via Flaminia) 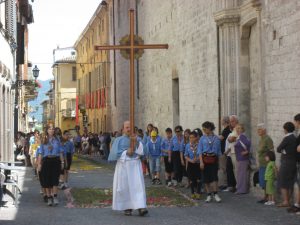 (Procession on the Feast of Corpus Domani in Cagli) 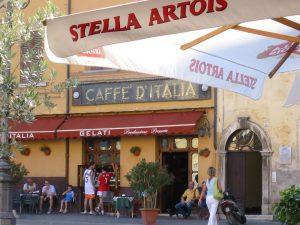 (Life on Piazza Matteotti in Cagli)

The Spokane-Cagli Sister City Association is the newest of the Spokane Sister City Societies.  Membership in the society qualifies you to participate in our official trips to Cagli as well as surrounding areas, the opportunity to meet with the Mayor while in Spokane or in Italy and participation in the many informative and fun events held by the society throughout the year. The Cagli Sister City in Spokane is also supported by the Order of the Sons and Daughters of Italy in America, Lodge #2172/The American Italian Club of Spokane.

Annual membership dues are Individual – $15.00, Family – $25.00 (no matter how large), and Business – $50.00.  All members receive an official membership card, and an invitation to the hosted Annual Membership Appreciation Event.

To join the Spokane-Cagli Sister City Society, please send a check made out to “The Sister City Association of Spokane”, and on the ‘purpose line’ on the check please be sure to indicate “Annual Membership Cagli Sister City” specifically. Thanks! Grazie mille!

Dues can be sent to:

Since 2016 the Sister Cities of Cagli, Italy and Spokane, Washington have sponsored a High School Exchange Program that selects 10 students form each country for a 17-day visit to each city, staying with host families.  The sponsorship in Cagli is through the City of Cagli, and in Spokane the sponsorship is through our Spokane-Cagli Sister City Association.  Both are set up as cultural immersion projects that allow students to learn the language and culture of our two cities and countries. Students typically attend classes 2 hours every morning and take part in many planned activities with the group and their homestay parents.  Partial funding on the Spokane side comes through the Sister Cities Association of Spokane, the Innovia Fund, small grants, and multiple benefactors which help make needs-based scholarships available.  Currently the program, which is highly competitive, accepts students from Spokane, Washington regional high schools,16 years and older, who have a minimum of one year of high school remaining after being engaged in the project.  Applications for the program are announced on the Facebook page of the Spokane-Cagli Sister Project, and facilitated through the Chase Youth Commission in Spokane, Washington.. The Exchange Program has been noted in newspapers and magazines, in both the USA and in Italy.